We are at a dangerous moment in history. Everybody is talking about climate change and the energy transition. Everybody is citing the fact emissions fell during Covid-induced lockdowns and promising to build back better. Yet, carbon dioxide emissions are now higher than at any time in the past 3.6 million years.

Change is happening, but it is too slow. The vast majority of the solutions we need to transition from a fossil-fuel society to one powered by renewables and greater energy efficiency already exist, but they need to be employed as fast as possible at scale. And we need to base our decisions on facts and data. 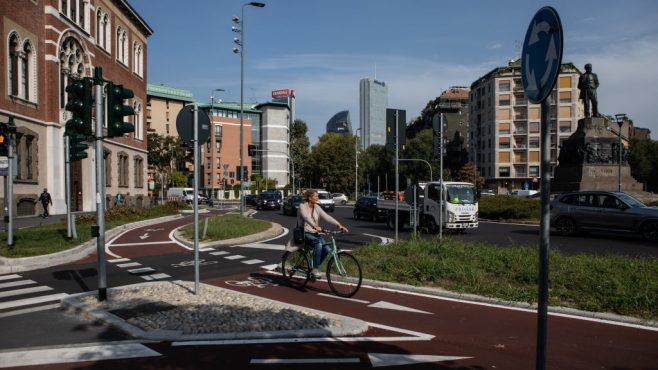 Milan is one city that has added bike lanes to encourage cycling during the Covid-19 pandemic.  (Photo by Emanuele Cremaschi/Getty Images)

“Levels of the two most important anthropogenic greenhouse gases, carbon dioxide and methane, continued their unrelenting rise in 2020 despite the economic slowdown caused by the coronavirus pandemic response,” the US National Oceanic and Atmospheric Administration (NOAA) announced last week.

Last year’s recession reduced carbon emissions by about 7%. Without this economic slowdown, the 2020 increase in emissions would have been the highest on record, says Pieter Tans, senior scientist at NOAA’s Global Monitoring Laboratory.

At the same time, more renewable energy came online last year than ever before. Data from the International Renewable Energy Agency (IRENA) shows the world added more than 260 gigawatts (GW) of renewable energy capacity, exceeding expansion in 2019 by close to 50%.

The transition cannot be achieved through technology innovation only or without shifting away from the still dominant supply-centric mindset. Angela Wilkinson, World Energy Council

However, while total fossil fuel additions fell, 60GW nonetheless came online in 2020, compared to 64GW in 2019.

Sixty-four per cent of new renewable capacity installed in 2020 was in Asia, with China leading the way. Yet the country also heads the fossil fuel pack. Emissions and air pollution levels have shot up as China’s economy zooms back into action and coal remains the beating heart of its energy production and consumption.

In addition to wind turbines and solar panels, the country last year brought 38.4GW of new coal-fired power into operation and has 247GW planned or under development, shows data from Global Energy Monitor.

Breaking this addiction will take time and money. Investments in the energy sector globally over the next 30 years will have to rocket from $98trn to $131trn – an average of $4.4trn a year – for the world to have a chance of limiting global temperature rise to 1.5°C above pre-industrial levels, says IRENA. Fossil fuel consumption will have to fall by more than 75% by 2050.

The task is daunting, but doable.

First, solutions exist. “Peer-reviewed research demonstrates authoritatively that even without any technological innovation – that is, using current renewable energy and energy-storage technology – we could meet up to 80% of global energy demand by 2030 and 100% by 2050,” US climate scientist Michael E. Mann reminds us in his recent book The New Climate War. “We just need to deploy it rapidly and at a massive scale.”

He adds: “It all comes down to political will and economic incentives.” This is the second key point. Money is not a problem, but how we choose to spend it is vital. This issue is of particular pertinence given the massive amounts of cash floating around in post-pandemic stimulus packages. Most are not in line with the Paris Agreement, with governments often choosing to prop up flailing fossil fuel industries rather than opting to really build back better.

Much is being made of France’s decision to ban short-haul flights of 2.5 hours or less in cases where journeys can happen by train. The potential impact of this should not be dismissed out of hand. But it is worth remembering short-haul flights are responsible for less than 1% of France’s aviation emissions. Likewise, Air France received a cool €7bn in government-backed loans last year to help keep it afloat during the pandemic and a further €4bn was signed off last week to contribute to a recapitalisation of the company.

In a similar vein, many of the stimulus packages are massively focused on hydrogen. Investing in R&D and new technologies is clearly important, and green hydrogen looks set to play an important role in decarbonising heavy industry and other sectors that are difficult to electrify.

But investing seriously in heat pumps, district heating, the insulation of buildings, efficiency measures, public transport, cycle paths, wind and solar power, protecting forests and nature, and so many other proven solutions is also vital. These are included in some of the stimulus packages, but whether the level of funding is commensurate with the gravity of the climate crisis is debatable.

People and the planet

Bill Gates and others talk about moonshot solutions. Some lofty projects come to fruition; many do not. Given we already have plenty of options to hand, we should fully employ them and start slashing emissions as fast as we can now rather than wait for silver bullets.

Brian Vad Mathiesen, professor of smart energy heating at Aalborg University, Denmark, has compared the idea of using hydrogen for heating houses to “forcing limousines onto people who cannot afford a car” and urged policymakers to push district heating and building renovation instead.

The need for such an approach can be better grasped if we also stop looking at the climate crisis and the energy transition as problems for which we need a technical fix, but as opportunities to protect the environment and create better lives for people.

The World Energy Council under the leadership of Angela Wilkinson is framing the energy transition as a story about humanity.  “The transition cannot be achieved through technology innovation only or without shifting away from the still dominant supply-centric mindset,” Wilkinson wrote at the beginning of the year. “Customer-centric solutions, broader innovation and more inclusive cooperation are essential.”

She added: “A new post-crisis context of affordability, debt and broader concerns about social justice creates a pivotal moment to refocus attention on the opportunity to make better use of all available technologies while recognising that there is ‘no one size fits all’ and that countries, companies and communities can learn faster, with and from each other.”

To have a real shot at keeping global warming below 1.5°C, building back better after Covid, creating jobs, prosperity and a better quality of life for all, we need to employ the best solutions we have for people and the planet. We need to leverage our collective intelligence and not allow the energy transition to be big business and technology as usual, couched in the language of climate action.

@Jones_Pippa
Philippa Nuttall Jones, based in Brussels, has over 20 years’ experience as a journalist and communications expert covering environmental issues, energy and climate change from the UK, France and Belgium.
SUBSCRIBED