In November 2017, shortly after Donald Trump announced he would take the US out of the Paris Agreement, the US diplomat responsible for global warming told the agreement’s yearly summit that the US intended to “remain engaged… in the UN framework convention”.

It was a message that seemed at odds with the president’s announcement. “President Trump has made clear the US position with respect to the Paris Agreement,” Judith Garber told the world’s dignitaries gathered in Bonn, Germany. “Although he indicated that the US intends to withdraw at the earliest opportunity, we remain open to the possibility of rejoining at a later date under terms more favourable to the American people.”

The statement foreshadowed the behaviour of the US state department within the Paris Agreement over the next three years: nominally about to leave, but always demanding a seat at the table to have a say in crafting the pact’s rules. 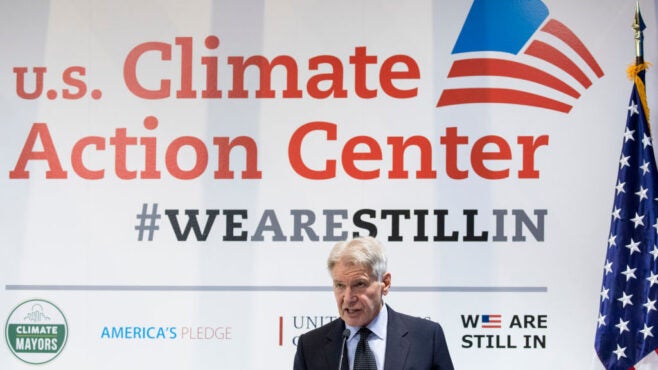 “We have still seen the US engage in the negotiations over the past three years,” says Jennifer Tollmann, who has followed the negotiations to set the Paris Agreement rulebook and commitments for the think tank E3G. “The US was just another party with red lines that had to be navigated.”

Why a year into the Biden presidency, the US remains a climate laggard

A global methane pledge: How climate change is reshaping oil and gas diplomacy

In fact, climate summits over the past three years have had quite a heavy US presence, not only from the state department negotiators, but also from US state and business leaders forming the ‘We Are Still In’ coalition pledging to continue climate action at the regional level.

So why were Trump’s negotiators so interested in setting the rules for an agreement they were supposedly going to leave? Because Trump’s gambit to make the Paris Agreement collapse by pulling the US out didn’t work, and that was already clear by the time of the 2017 summit in Bonn. Rather than refusing to participate if the US didn’t have obligations, China pledged to double down on its efforts. Although Trump ally Jair Bolsonaro, the Brazilian president, threatened to take his country out during his election campaign, he backed off after the EU threatened to halt free trade talks if he did so. In fact, the only two countries that hadn’t signed the accord, Syria and Nicaragua, signed it after Trump’s announcement – although several countries have still not ratified the agreement.

“Even though everyone was disappointed, most countries just shrugged and went on with their lives,” says Tollmann. “But the process did not roll on as quickly as it would have with the US’s diplomatic weight behind it, and that is where the re-entry is going to make a real difference.”

As the saying goes, if you are not sat at the table, then you are on the menu. US diplomats knew that and this is why they have stayed engaged with the talks over the past three years, only officially leaving on 4 November.

The reason for the long delay in the departure was ostensibly the agreement’s rules, but it didn’t have to be this way. Out of all the options to leave the accord, the Trump administration chose the one that would take the longest. US officials could have declared Barack Obama’s decision to not put the agreement to the US Congress (by not deeming it a “treaty”) to have been invalid. Congress could have then rejected the agreement, taking the US out right away.

Instead, the Trump administration chose to go through the official process of withdrawal, which takes more than three years. The “earliest opportunity’ referred to by Garber just happened to fall on the day after this year’s presidential election. A state department official confirmed in 2017 that, in the meantime, US negotiators would continue coming to COP summits to hammer out the pact’s rule book “to ensure a level playing field that benefits and protects US interests”.

US diplomats at Paris Agreement talks have, in the past three years, pushed for developing countries such as China and India to be more transparent in verifying their emissions reductions. They resisted efforts by those same countries to reinsert the principle of ‘common but differentiated responsibility’ into the agreement – the idea that developing countries should have to do less to fight climate change than developed ones. They resisted efforts to increase oversight over climate finance from developed countries. They have also sought to ensure the Paris Agreement rulebook will not stymie the US’s big plans for exporting its surplus shale gas in the form of liquified natural gas (LNG).

Of course, during all this time the rest of the people at the table have known the US was leaving. The state department negotiators could only press their case so far. In the meantime, powerful countries with energy interests opposed to those of the US, like Russia and China, had a fully legitimate seat at the table. Russia wants to block US LNG imports to Europe, and China has had sourcing conflicts with the US in the Middle East.

In a parallel universe where Donald Trump won a second term, it is possible that many countries would right now be scaling back their Paris Agreement commitments and maybe even pulling out. Jacob Werksman, the principal adviser to the European Commission on Paris Agreement talks, said this summer that “some of them are hesitating, to see what the results of the US election might be, on the theory that the international community as a whole is likely to move more ambitiously with renewed US participation and US leadership”.

However, the win for Joe Biden, who has pledged to bring the US back into the Paris Agreement on day one, will mean that the US’s absence from the climate pact will last only four months, from 4 November until late February. Were it not for Covid, the timing might have posed a difficulty because we would, right now, be in the middle of the COP26 climate summit in Glasgow. Its postponement until November next year may have been a blessing in disguise because it gives countries time to see what Biden’s climate moves are and raise their ambitions accordingly. If countries had to rush their pledges now, they might have been locked into low ambition.

“There is an interest to see what the US is shifting to,” says Tollmann. “We are expecting that to have an impact on other countries’ emissions pledges.”

Although emissions reduction pledges are technically due at the end of this year, she believes the UN Framework Convention on Climate Change, which administers the Paris Agreement, will be lenient because it knows countries have to factor in both Covid and the change in US administration. Covid recovery packages will play an especially important role.

“We want countries to lock into the maximum amount of ambition they can because that is what we will hold countries accountable to,” says Tollmann.

“The key will be to watch the impact the Biden presidency will have on countries that have had more rogue behaviour,” she adds. “I am interested to see how Brazil, Turkey and Saudi Arabia will be positioning themselves. There has been very blatant obstructionism that I think will be deemed unacceptable under a Biden presidency.”

In terms of the actual negotiations, however, not much may change. The state department under Biden will have many of the same priorities it had under Trump, including exporting US LNG.

“We still saw the negotiating team under Trump advocating for strong rules and strong transparency,” says Tollmann. “They weren’t trying to dismantle the system by any means. A lot of that will stay I think, but they will have more capacity to negotiate with other countries.”

Of particular interest to US negotiators will be the rules around loss and damage, she says. The US is determined to not establish any system where big emitters have legal liability for the effects of climate change on vulnerable countries, and this is not expected to change under Biden.

Barring extreme developments in the US over the next two months, we will never know what an alternative reality with the US solidly out of the Paris Agreement would have looked like. With the US coming back in, the future of the agreement now looks much more solid for the next three decades.