At the end of 2021, the world’s eyes will turn to the UK as host of the next UN climate summit in Glasgow (COP26), postponed from last year when the pandemic put a halt to the climate talks. The country is keen to highlight its ambitious 2030 and 2050 emissions-reduction goals. However, businesses warn that a collapse of the UK’s main climate policy tool – a cap-and-trade system – could end up embarrassing Britain and sabotage its climate efforts. 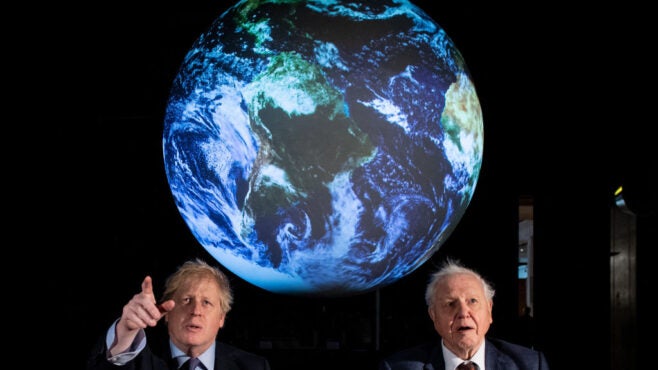 On 1 January 2021, when the UK left the EU single market, it also left the EU Emissions Trading System (ETS). The EU’s cap-and-trade system obliges polluting industries to buy allowances for carbon emissions over a set amount, incentivising emission reduction efforts. It has been the core policy tool for reducing emissions in the EU – and the UK – for more than a decade.

The UK left intending to set up its own, independent UK ETS, but one month in, the new UK ETS still has no price for carbon, no auctioning system and offers no indication of what its future will hold.

“If you are a power operator in the UK, you are looking at a black hole given the lack of carbon price signal,” says India Redrup, policy manager at trade association Energy UK. “Right now the risk it is putting on power operators is quite unbearable. It is not a situation we are used to – it is very unnerving.”

Fossil fuels matter as much as renewables

A recipe to turn renewable hydrogen into reality

The UK government says its ETS will eventually be “more ambitious than the EU system it replaces – from day one the cap on emissions allowed within the system will be reduced by 5%, and we will consult in due course on how to align with net zero”. It is the first ETS to explicitly align itself with a net-zero 2050 goal, although this target is also expected to be introduced in an upcoming revision of the EU’s system.

For the moment, the UK ETS exists in name only: there are no carbon permits available. The government has said auctions for UK carbon permits will start no later than the second quarter of 2021. “That could end up being six months without knowing what carbon price the UK ETS will be churning out,” says Redrup.

If you are a power operator in the UK, you are looking at a black hole given the lack of carbon price signal. India Redrup, Energy UK

The UK has a price floor of £15 (€17) per tonne of CO2, so market participants know it cannot go below that; however, where it will end up is anyone’s guess. British companies were among the biggest buyers of permits in the EU ETS. They were also among the best performers for emissions reductions. Now, a section of the EU ETS, with some of its most active participants, has suddenly been cordoned off.

“Having fewer participants decreases market liquidity, that is just economic principles,” says Redrup. “Fewer participants buying and selling and bidding makes it more likely the price will be at extreme levels rather than gravitating to a stable middle. More participants means more stability and less risk of market shocks.”

By isolating a portion of the market that is among those reducing emissions fastest, she says, market participation could gradually shrink over time – leaving the market somewhat empty if it has not linked with other systems by then.

The EU has learned the hard way what a too-low carbon price can do to climate action efforts. After years of living with a flagging price, the European Commission intervened in 2014 to raise it by establishing a market stability reserve – a highly controversial move that almost killed the EU’s flagship climate policy. The price for a tonne of emitted carbon is now around €30, up from around €5 six years ago.

The UK’s floor price will guarantee the price cannot go below €17, but many expect it to be only just above this level. Others fear wild fluctuations bringing too-high prices well above €30. If this happens as the world’s climate dignitaries are converging on Glasgow, it would be embarrassing for the UK government.

There was quite a lot of hype about what was coming in Q1 2021 – a raft of legislation was promised, none of which has been forthcoming. Kerry Liebenberg, Linklaters

“The UK has obviously got great ambitions to be seen as a climate leader, particularly in the context of COP26 coming up, and this is one of their strongest policy instruments to get us there,” says Kerry Liebenberg, counsel at law firm Linklaters. “It is the first carbon market to be formally aligned with net-zero targets – [the government] likes all that rhetoric. They are going to want to be seen at the forefront of this.”

However, despite the push to present the UK as a climate leader ahead of COP26, the government seems remarkably relaxed about actually getting the system at the core of its climate policy up and running.

“There was quite a lot of hype about what was coming in Q1 2021 – a raft of legislation was promised, none of which has been forthcoming,” says Liebenberg. She says businesses are still waiting for secondary legislation under the finance act to establish the rules for auctioning. There is still no information on the mechanisms to support market stability, or an auction price reserve.

Linking back to the EU

British companies may have been removed from the EU ETS, but they are not acting like it. Amid the uncertainty, they are still buying permits from the EU carbon market. UK-based companies have until April this year to comply with the EU ETS obligations for 2020. However, the allowance-purchasing happening now seems to be for 2021 and beyond – a period in which they face no EU obligations.

“Individual companies don’t want to just sit on their hands,” says Redrup. “They are asking, ‘what do we do now?’ Do we buy EU allowances? Do we buy nothing? What do we do to hedge that risk? Nobody wants to be the first movers in the market lest they are caught out on the wrong side of what the price ends up being.”

“So maybe the safest option is to buy EU allowances and hope that we link to the EU ETS at some point,” she says. “That is the only proxy to go with now; what else is there as a signal of the price of carbon in our geographical area of the world?”

There is near-universal hope among British companies that the UK system will quickly link with the EU ETS, like Switzerland’s independent ETS. In a white paper on energy published in December 2020, the government said: “The UK is open to linking the UK ETS internationally in principle and we are considering a range of options, but no decision on our preferred linking partners has yet been made.” The statement struck many as odd because there is effectively only one option for linking – the EU ETS.

“We were never proponents of a long-term, stand-alone UK ETS,” says Redrup. “We have long had concerns about liquidity. When you are starting from scratch with a brand new scheme from day one, there is no past process to go on.”

The question is when this linkage could happen. The UK ETS will be very similar to the EU ETS and could easily be linked to it, as it covers the same industries. The only material difference so far is that it will have a slightly higher fine for exceeding emissions limits. However, the longer it takes for the markets to link, the more risk they will diverge to a degree that will make linking difficult. Talks to link Switzerland’s ETS with the EU’s took several years.

“I would think that at the moment [the government’s] overriding design considerations for the UK ETS are to align,” says Liebenberg. “I don’t think they will be looking to change the scope, they will want to be seen to be in line, as far as possible, with the design of the EU ETS.” The fact the UK government is consulting, like the EU, on whether to include sectors such as maritime in its system is proof of this, she adds.

Maybe the safest option is to buy EU allowances and hope that we link to the EU ETS at some point. India Redrup, Energy UK

She agrees Switzerland is the “obvious comparison”, but insists that given the UK and EU were, until the end of last year, part of the same system, any linkages should be possible without much fuss.

“We were up until very recently married and now we are divorced, but we have gone to extreme lengths to mirror the EU system,” says Liebenberg. “The EU wouldn’t have concerns about the UK’s capabilities to run a scheme or what design features might affect potential linkages. So while I know the Swiss process took a really long time, I don’t think that should be a basis of concern for us.”

For the UK government, the problem with linking will be more political than logistical, and many may be left wondering what the point was of leaving the EU ETS in the first place.

“Some people might argue that if we link to the EU ETS, we are not around the table when changes are being made to that system,” says Redrup. “We have after all been some of the louder voices in increasing the ambition of the EU ETS, but there are still ways you can influence it. We would only be disappointed if ambition drops, and that is unlikely in a world where the EU has increased its 2030 targets and signed up to net zero for 2050.”

Liebenberg says: “It is really just going to be down to political will. The EU has said linking before the first UK ETS compliance date in 2022 would be possible, but there is the tricky business of agreeing on how to delink, if things don’t go as planned. How can you make sure both sides could walk away unscathed and return to something separate? In the context of the tricky last few years of discussions between the EU and UK, it is not going to be an easy political conversation – but it has to be done.”