Joe Biden’s programme to tackle climate change and decarbonise the US energy system has won praise, but less clear is how his administration will deal with the risk of investor lawsuits to the clean energy transition.

One of President Biden’s first actions on coming into office was to revoke a key cross-border presidential permit needed to finish the controversial Keystone XL pipeline. The project is now unlikely to go ahead, but the move threatens to revive a $15bn North American Free Trade Agreement (Nafta) lawsuit filed by the pipeline’s Canadian operators when former president Barack Obama denied them the permit. For now, TC Energy says it is considering its options. 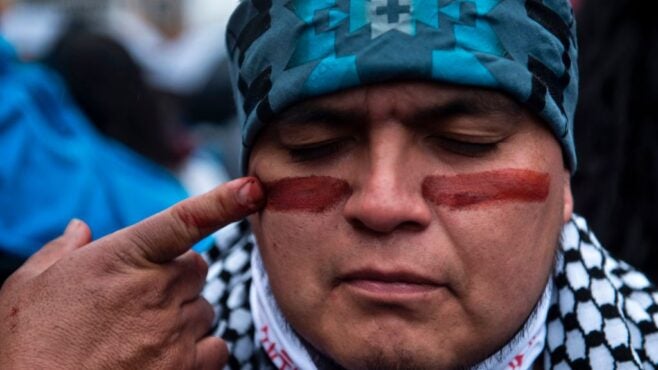 An activist in Washington, DC in 2017 getting ready to protest against the Keystone XL pipeline. (Photo by Brendan Smialowski/AFP via Getty Images)

If the Keystone XL lawsuit does return, it may be the first of a wave of similar cases. Researchers estimate that trillions of dollars of assets will be stranded if the world limits global warming to 2°C as per the Paris Agreement. This sets the stage for a barrage of legal battles by investors seeking compensation.

Their claims are enabled by a system known as investor-state dispute settlement (ISDS), a network of thousands of investment treaties and trade agreements that allows investors to sue states for actions that harm their profits, including those taken to protect the climate.

Biden has taken office during a critical juncture in the future of ISDS, with major reform efforts ongoing at the UN, in Europe and across the Global South.

In the past decade, the politics around ISDS in the US have been transformed. The negotiation of the Transatlantic Trade and Investment Partnership under Obama produced an unprecedented politicisation of the system, which had been supported by all US presidents since Ronald Reagan.

Despite being polar opposites on the political spectrum, both Donald Trump’s and Bernie Sanders’s primary campaigns in 2016 opposed ISDS for incentivising US companies to create jobs abroad rather than at home.

The growth of controversial investor lawsuits over health, labour and environmental regulations has cemented opposition to the system in the Democrats’ increasingly powerful progressive wing.

ISDS has also attracted neoliberal opposition from groups such as the Cato Institute, which argues international investors should rely on insurance markets for protection rather than involve governments.

This view was echoed by Donald Trump’s US trade representative, Robert Lighthizer. Under Trump’s direction, Lighthizer negotiated the replacement of Nafta with a new treaty, the US-Mexico-Canada Agreement (USMCA). One of the most notable changes in the new agreement was the abolition of ISDS between the US and Canada – previously the most litigated bilateral ISDS relationship in the world and the basis for the Keystone XL dispute.

I don’t believe corporations should get special tribunals that are not available to other organisations. Joe Biden

Much like Hillary Clinton before him, however, Biden has been reluctant to set out a clear position on ISDS.

“I don’t believe corporations should get special tribunals that are not available to other organisations,” Biden told the steelmakers’ union, in his only statement on ISDS during his election campaign. “I oppose the ability of private corporations to attack labour, health and environmental policies through the ISDS process, and I oppose the inclusion of such provisions in future trade agreements.”

It is not clear from this statement whether Biden opposes the inclusion of any ISDS provisions or just those that offer insufficient protection for labour, health and environmental regulations.

“Many leading Democrats were saying the same thing so it’s not as if he went out on a limb,” says Lisa Sachs, director of the Columbia Centre on Sustainable Investment.

ISDS: going but not gone

Nonetheless, Biden could be subject to pressure from centrists in Congress to retain some form of ISDS in future agreements.

Even if Biden does exclude all ISDS from future trade deals, Sachs says, the effects on the system as a whole are likely to be limited: “We don’t have many treaty negotiations upcoming [and] while I believe the intent, commitments to not include ISDS in new treaties do not do enough to address the existing stock of 3,000 treaties,” she explains.

Significant responsibility is likely to fall on Biden’s US trade representative, Katherine Tai.

Having played a key role in getting the USMCA through Congress, Tai is well versed in the complex constraints presented by Congress. At a summer campaign event, when asked about the Biden administration’s position on ISDS, Tai demurred, but hinted at continuity with the Trump administration. “I think it is worth looking at the logic that has driven how ISDS has landed in the USMCA,” she said.

Like Biden however, Tai is critical of the system as it stands. “I think the increasing discomfort is that multinational corporations have done so well [out of ISDS] and others have done not so well,” she said. “There are others who have maybe even been harmed by the programmes. […] Not only in ISDS are firms not on the side of being held accountable, they are […] given extra private rights of action that no one else has.”

Biden and Tai will enter office with overlapping and contradictory reform movements in the UN, EU and Global South.

Since 2017, the UN Commission on International Trade Law (UNCITRAL) has been reviewing the future of ISDS. Despite strong opposition to the system, the Trump administration’s antipathy towards multilateral institutions allowed other interests to dominate these negotiations. The US is not one of 49 countries that have made written submissions to the group.

As a result, the UNCITRAL negotiations have focused not on abolishing ISDS but on improving the system’s transparency and accessibility. Renewed US engagement under Biden could give the discussions fresh impetus.

The EU has been the dominant political player. It is pursuing a multilateral investment court or a permanent judicial institution to replace the ad hoc tribunals currently used for ISDS. By employing a permanent roster of salaried judges, rather than hiring commercial lawyers on piece rates, such an overhaul would answer many critics’ concerns about transparency. A permanent court could become home to a stable body of case law, improving the consistency of rulings and dampening concerns about conflicts of interest.

The US opposed these plans under Obama and continued to do so under Trump. If the Biden administration wants to renew the US’s alliance with Europe while staking out a middle path on ISDS, it may yet support the EU’s reform proposals.

The EU is under growing pressure to harden its position, however. In 2018, the European Court of Justice (ECJ) ruled that intra-EU ISDS is incompatible with EU law, dealing a blow to the EU’s lobbying in favour of the system at UNCITRAL.

The ECJ ruling put a spotlight on the Energy Charter Treaty (ECT), the world’s most heavily litigated investment treaty and a continuing source of intra-EU ISDS cases.

Although the US is an observer rather than a member, its diplomatic power means the Biden administration could exert significant influence on efforts to reform the ECT – and protect the energy transition from investor-state lawsuits.

Established in the aftermath of the Cold War, the ECT was intended to facilitate the privatisation of the energy sector in eastern Europe by protecting Western investors from ill-treatment. But Russia’s 2009 withdrawal, after being handed a record $50bn fine, sapped the treaty of its raison d’être. Russia is by far the largest source of EU energy imports, providing 37% of its coal, 26% of its oil, and 44% of its gas in 2018. A slew of expensive claims against western European governments has further undermined support for the treaty, with Italy withdrawing in 2016.

More recently, the treaty has attracted sustained opposition from those concerned it could inhibit the energy transition. Members of the European Parliament – with backing from climate scientists, major institutional investors and the renewable energy industry – are pushing to amend the EU’s Climate Law, which sets a legally binding net-zero emissions goal for 2050, to remove ECT protection for fossil fuels.

The European Commission has described the ECT as “outdated” and is trying to remove its intra-EU ISDS provisions; however, the need for unanimity has slowed progress. Japan has blocked reform of the ECT’s ISDS provisions, to the frustration of governments in Austria, France, Spain and Luxembourg.

The EU is now pinning its hopes on an intervention by the ECJ, which is due to rule on whether intra-EU ISDS provisions in the ECT are compatible with EU law. It hopes the court will clarify they are not compatible, as it did for ISDS in bilateral investment treaties. Alternatively, EU member states could simply agree to refrain from using the ECT’s ISDS provisions against one another.

Both options would keep ISDS in operation between EU and non-EU states, however, and outside the EU. EU investors could still sue their EU hosts, moreover, if their company has a non-EU subsidiary. In 2013, Canadian firm Lone Pine launched a Nafta case against its own government through a US subsidiary.

The difficulty of reforming the ECT raises awkward questions about EU plans for a multilateral investment court for ISDS. If a system is reliant on treaty amendments to evolve, it will always be subject to the vetoes of signatory states.

“The more multilateral a system, the less likely you are going to be able to make any tweaks or changes,” says Todd Weiler, an independent Canadian ISDS practitioner.

That a multilateral investment court could become home to a body of case law, moreover, brings with it a countervailing force no less problematic – the risk of a runaway jurisprudence.

“When the World Trade Organisation was established it had a panel system, similar to arbitration, and an appellate body,” Weiler says. “A lot of people thought that would be great because it would bring consistency – and it did. But the appellate body ended up basically seizing the reins, exercising the power accorded to it and making decisions members didn’t like.”

Weiler adds: “You have got to be careful what you ask for. When you establish an institution to make decisions you are really handing over the reins to let them develop the system. It could go either way. But whatever way you slice it, states are surrendering more sovereignty, not less, by establishing a court.”

Covid-19 has increased the urgency of reform, with experts warning governments could face a barrage of lawsuits over their pandemic response measures.

In this context, states may choose to abandon ISDS altogether. As one law firm specialising in ISDS put it, Covid-19 could “be a final sweep of the sword by discouraging states from including [ISDS] in their treaties”.

Unilateral termination, however, generally leaves states bound by ‘sunset provisions’ stipulating that treaties continue to protect existing investments for a fixed period – as long as 20 years, in 16% of treaties. Sunset provisions have even been included in negotiated terminations, such as that of Nafta. If Biden decides to terminate Keystone XL, he could still face a lawsuit under that defunct treaty as late as 2023.

Nonetheless, unilateral action could breathe life into the multilateral reform process. Mobilisation against ISDS by South American countries in the late 2000s spurred a global debate on the system, reflected in the easing of sunset provisions in new treaties.

“I think serious mobilisation by any region would have a major effect,” says Sachs. The Biden administration’s hopes for a rapid and orderly global energy transition may hinge on ISDS, a system whose future hangs in the balance, but about which the president, so far, has had little to say.

Topics in this article: Trade