Personnel is policy – for good and ill. Dedicated, competent leadership from President Barack Obama and his team enabled the US to help a global coalition contain an Ebola virus outbreak in western Africa in 2014. Indifference, incompetence and an abdication of leadership under President Donald Trump enabled the Covid-19 pandemic to rage out of control in the US.

With so much at stake, and so much work needed to right what is wrong, it was no surprise when Joe Biden selected Ron Klain, President Obama’s Ebola response coordinator, to serve as his chief of staff. Biden’s message was clear: the senior ranks of the federal government in the Biden-Harris administration will be occupied by qualified, competent public servants. This ambition is borne out by the women and men Biden has asked to implement his clean energy agenda.

Unlike Trump’s political appointees, many of them former industry lobbyists and all of them expected to show loyalty to Trump above all else, Biden’s nominees have been screened for their experience in government. Here is the team selected to convert Biden’s $2trn climate plan into reality. 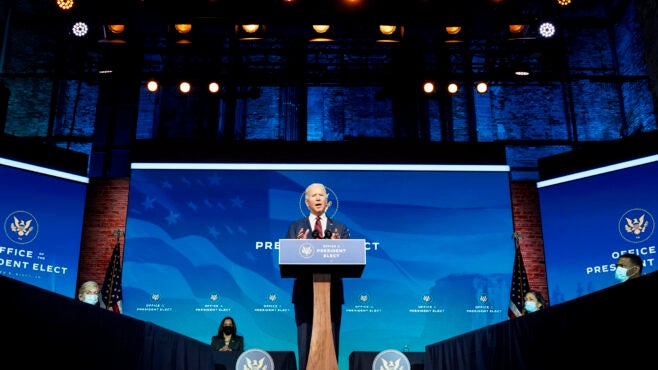 Gina McCarthy will serve as Joe Biden’s national climate adviser, a new senior staff position, and lead the new White House Office of Domestic Climate Policy. The position will not require Senate confirmation, so McCarthy will join Biden in the White House from day one. 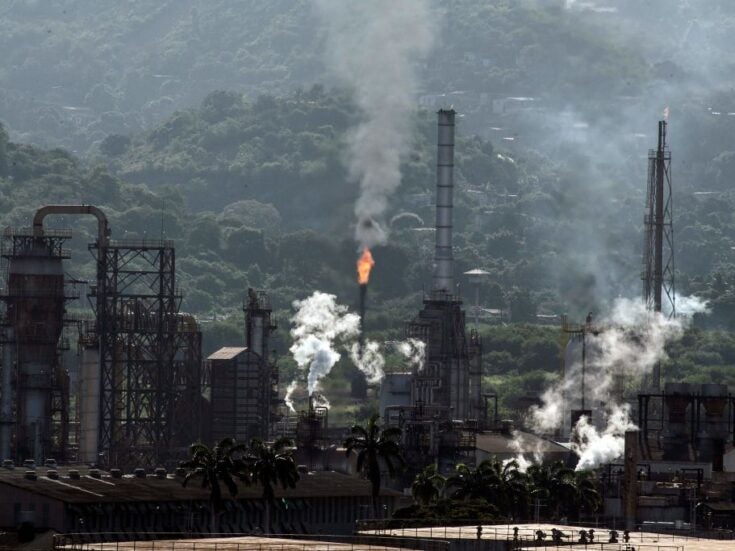 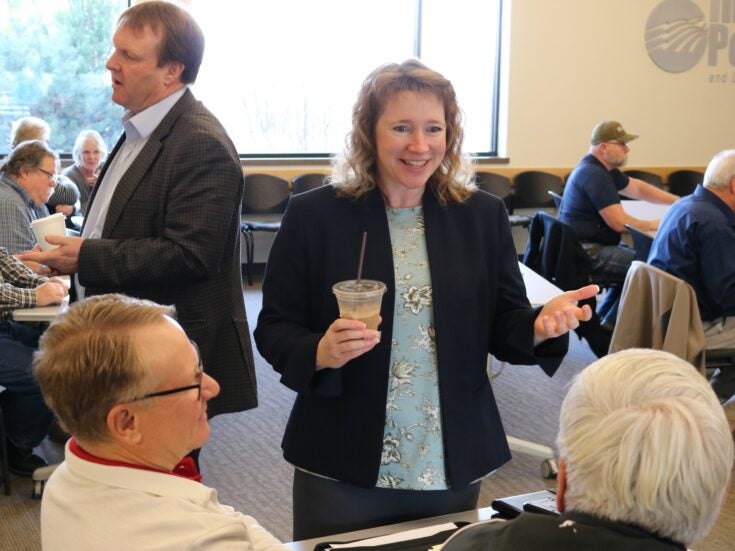 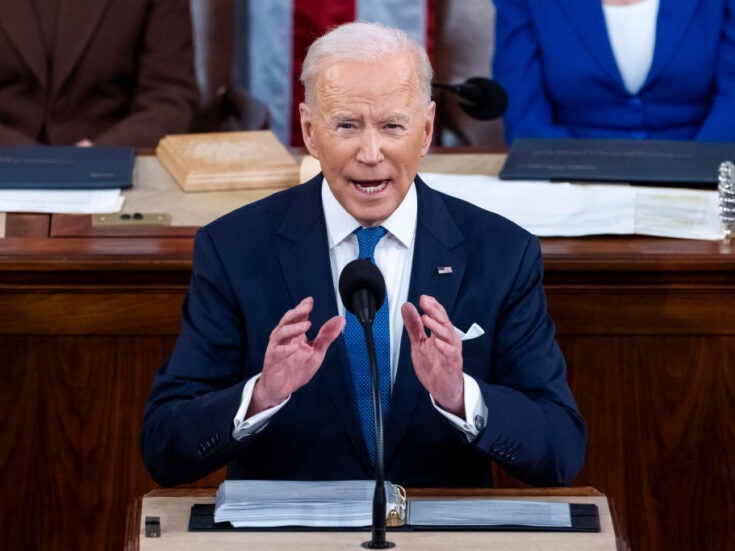 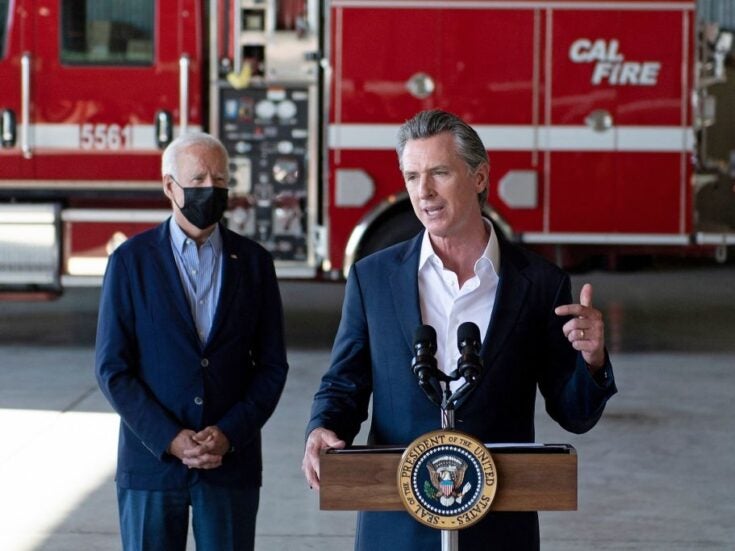 Biden would have been hard-pressed to find a candidate better suited to coordinate his climate change fight from the White House. A former long-time environmental state and federal environmental regulator, McCarthy served as the top air pollution official and administrator at the Environmental Protection Agency (EPA) during the Obama administration. McCarthy was instrumental in leading efforts at the EPA to implement the White House’s Climate Action Plan during President Obama’s second term.

That plan relied on action from the executive branch. Even with Democrats having won control of the US Senate, and with it the ability to steer Congress’s legislative agenda, Joe Biden is still expected to pursue an aggressive climate change agenda using his executive authority. McCarthy will lead those efforts, which are likely to include working with the EPA to develop a successor to the Clean Power Plan, the Obama administration’s plan to decarbonise the power sector.

Gina McCarthy’s partner at the EPA, if confirmed, will be Michael Regan. Regan is an EPA veteran who has served at the agency during Democratic and Republican administrations. Among his first tasks will be to restore morale and rebuild capacity at an agency whose long-time staff were sidelined during the four years of the Trump presidency by administrators who did not believe in the EPA’s mission.

Since 2017, Regan has served as secretary of the North Carolina Department of Environmental Quality. He helped craft North Carolina’s Clean Energy Plan, which calls for power sector greenhouse gas emissions to be reduced by 70% by 2030 and for carbon neutrality by 2050. He also created his agency’s first Environmental Justice and Equity Board.

Regan would be the first black man to lead the EPA. He promises to focus on environmental justice at the agency.

“We will be driven by our conviction that every person has the right to clean air, clean water and a healthier life – no matter how much money they have in their pocket, the colour of their skin, or what community they live in,” he said when his nomination was announced.

Joe Biden has charged former Secretary of State John Kerry with restoring the US’s tattered reputation abroad. He is Gina McCarthy’s international counterpart. Biden’s victory lifted the shadow from the Paris Agreement, but rebuilding trust with allies spurned or maligned by President Trump over the past four years will test Kerry’s diplomatic skills. Kerry will serve as Biden’s special presidential envoy for climate, a new position which comes with a seat on the White House’s National Security Council. The position does not require Senate confirmation.

Rejoining the Paris Agreement will be easy; President-elect Biden has promised to sign paperwork required to rejoin the pact on his first day in office. Convincing other countries the US can be relied upon to remain a partner in the global fight against climate change at COP26 in Glasgow and beyond will be much harder.

However, Kerry brings credibility to the job. A long-time friend of Biden and formerly the nation’s highest-ranking diplomat, interlocutors in foreign capitals will know Kerry speaks for the president. Kerry was instrumental, too, in brokering two of the Obama administration’s most important foreign policy achievements: the Paris Agreement and the Iran nuclear deal.

US presidents have been of two minds when selecting secretaries to lead the Department of Energy. Barack Obama selected two PhD scientists, Steven Chu and Ernest Moniz, technologists conversant with the research under way at the department’s world-class laboratories. Other presidents have opted for former governors or members of Congress (Bill Richardson, Spencer Abraham, Rick Perry) who, the thinking went, would be better equipped to maintain good relationships with lawmakers at the Capitol. Jennifer Granholm ticks both boxes.

A former two-term governor of Michigan, Granholm has, in the decade since leaving public office, became an evangelist for the emerging clean energy economy. She joined the faculty of the University of California, Berkeley, and was given a research post at the Berkeley Energy and Climate Institute. She founded American Jobs Project, a non-profit organisation dedicated to expanding US clean energy manufacturing. She also sits on the board of Proterra, a California-based manufacturer of electric buses and heavy-duty trucks.

Expect Granholm to draw on that experience, as well as her ties to the automotive industry, to accelerate energy innovation in the US. She will also play a role in leveraging $40bn in unused Energy Department lending, leftover from the 2009 stimulus bill, to help Biden realise his clean energy goals.

“The way forward for our economy is investing in clean energy technologies,” Granholm tweeted in December 2020. “By boosting our ability to manufacture and deploy those technologies at home, we are positioning America and our workers to lead the world in addressing the climate crisis.”

The leader of the US Department of Transportation is often a former big-city mayor. It makes sense. A big part of the job is disbursing federal funding for highways, light rail, tram lines and other large infrastructure projects. Joe Biden’s nominee, Pete Buttigieg, would give the department a leader with a growing national profile. Buttigieg’s surprisingly strong presidential campaign turned the former two-term mayor of South Bend – Indiana’s fourth-largest city (population 102,000) – into a rising star within the Democratic Party. If confirmed, he would be the first openly LGBTQ Cabinet secretary.

Buttigieg does not have a deep record on transportation issues, but his tenure as South Bend mayor saw the city adopt progressive urbanist policies. These included legalising ‘granny flats’ to expand and densify the housing stock; eliminating or reducing parking minimums that require private businesses and residences to provide at least a certain number of off-street parking spaces; and rebuilding major downtown streets and sidewalks to encourage walking and cycling. His presidential campaign released a $1trn infrastructure plan in January 2020 that called for more than $250bn to be spent on improving public transport and repairing existing transit systems.

Since his nomination was announced, Buttigieg has highlighted issues he would prioritise as transportation secretary. These include making amends for the US’s shameful history of damaging minority neighbourhoods with urban freeways, and promoting the adoption of electric vehicles (EVs).

“Black and brown neighbourhoods have been disproportionately divided by highway projects or left isolated by the lack of adequate transit and transportation resources,” Buttigieg tweeted last month. “In the Biden-Harris administration, we will make righting these wrongs an imperative.”

“To meet the climate crisis, we must put millions of new EVs on America’s roads,” he tweeted in December 2020. “It is time to build public charging infrastructure powered by clean energy and make it available in all parts of this country.”

Deb Haaland, secretary of the interior

Don’t let the department name confuse you. In many countries, the interior ministry is responsible for public security or crisis management; in the US, the Interior Department is responsible for managing the nation’s federal lands and natural resources. The department’s remit includes oversight of the country’s national parks and wildlife refuges as well as much of the wild and scenic landscapes in the western US.

Deb Haaland, who represents the first district of New Mexico in the US House of Representatives, is a member of the Pueblo of Laguna tribe. If confirmed by the US Senate, she would be the first Native American to fill the nation’s top land manager job, or indeed to hold any Cabinet-level position.

Haaland’s ascension to the top of the Interior Department would give voice to one of the US’s most marginalised populations and could start to right the federal government’s long, sorry record of not according tribes the legal respect they are due. The Bureau of Indian Affairs, an Interior Department agency Haaland would manage, has a scandal-plagued history of mismanaging income, such as mineral or grazing royalties, from tribal lands held in trust by the federal government.

“Our Interior Department will fight to address climate change and environmental injustice,” Haaland tweeted in December 2020. “We will empower communities who have shouldered the burdens of environmental negligence. And we will ensure that our decisions will once again be driven by science.”

Topics in this article: Donald Trump, US