The interminable presidential campaign is over. Joe Biden will be sworn in as the 46th US president on 20 January 2021. What can Biden do on day one of his presidency to begin to reverse Donald Trump’s corporatist, pro-fossil fuel agenda? Quite a lot, it turns out.

The full sweep of Biden’s $2trn climate plan will require legislation passed by Congress, and party control of the US Senate may not be decided until runoff elections are held in the state of Georgia on 5 January, 2021. Even so, there is plenty President Biden can do to move his climate and clean energy agenda forward with executive action alone.

“Reregulating to address climate change is not uniformly an easy task,” says an analysis from researchers at the Sabin Center for Climate Change Law at Columbia Law School. “Where agencies have finalised rules that fail to incorporate or reverse climate mitigation and adaptation goals, for example, the process of reregulating will usually require starting the rule-making process over.”

A new administration could, however, “revoke President Trump’s executive orders, memoranda and proclamations, as well as certain types of departmental or agency directives and orders, immediately”, they add. 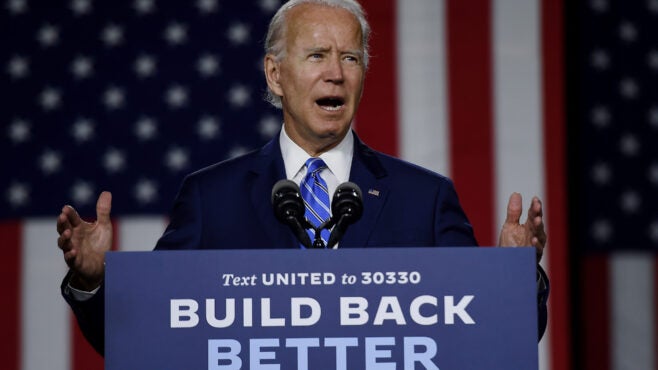 Joe Biden speaks at a “Build Back Better” clean energy event in July 2020. (Photo by Olivier Douliery/AFP via Getty Images)

In August 2020, the Sabin Center team published ‘Climate Reregulation in a Biden Administration‘, a detailed how-to guide for the incoming Biden Administration. They even prepared a draft executive order Biden could sign on his first day in office “to instantly revoke as many of President Trump’s deregulatory actions as legally possible, reset policies for the entire federal government, and promptly begin the critical work of setting the US on a path toward addressing the climate crisis”.

Among the actions Biden could revoke are Trump executive orders that scrapped the 40% greenhouse gas emissions reduction goal for federal government operations; encouraged offshore energy exploration, including oil and gas drilling in the Arctic and Atlantic oceans; and expedited the approval of oil and gas pipelines. In all, the Sabin Center’s Climate Deregulation Tracker has logged 159 executive branch actions by the Trump Administration to scrap climate-related regulations and policies since Donald Trump was sworn in as president on 20 January 2017.

Before the election, Biden’s campaign outlined measures the candidate would undertake on day one if elected to the presidency, including rejoining the Paris Agreement. When Trump announced his intention to pull the US out of the deal in June 2017, it triggered the withdrawal timeline: the US formally exited the pact on 4 November 2020. The Biden White House must send a letter to the UN secretary-general stating the US intention to re-enter the agreement; the US would be readmitted 30 days after receipt of the letter.

After day one, the task before the Biden Administration is more challenging. Biden and Vice-President Kamala Harris must invest time and resources in the painstaking process of post-Trump repair. At home, federal agencies decimated by resignations and cowed by White House meddling must be rebuilt and empowered to start anew rulemakings to protect people and the planet. Overseas, the diplomats who were sidelined as Trump retreated from global engagement and walked away from multilateral agreements must convince allies and adversaries alike that US commitments will be honoured going forward.

Beleaguered career employees at the US Environmental Protection Agency (EPA) who, over the past four years, were tasked with writing rules antithetical to their agency’s mission, will be asked to write new rules. This task will include rescinding or replacing the Affordable Clean Energy Rule, the Trump Administration’s weak replacement for President Obama’s Clean Power Plan, and the Safer Affordable Fuel-Efficient Vehicles Rule, Trump’s attempt to weaken fuel efficiency standards for light-duty vehicles.

To rebuild other nations’ trust in US diplomacy and reassert US global leadership on climate change, Biden pledged during the campaign to convene a “climate world summit” within his first 100 days in office. This meeting would “directly engage the leaders of the major greenhouse gas-emitting nations of the world to persuade them to join the US in making more ambitious national pledges, above and beyond the commitments they have already made”, he said.

Rejoining the Paris Agreement and convening a global climate summit are just the start of what the US could achieve with a reinvigorated climate diplomacy. Former US State Department lead climate lawyer and negotiator Susan Biniaz recently provided a comprehensive to-do list for Biden’s team. Once the US rejoins the Paris pact, it would be obligated to submit a “nationally determined contribution” to the UN Framework Convention on Climate Change (UNFCCC) with a new emissions reduction target, says Biniaz.

“It can meet that obligation in several ways, including through a placeholder target pending development of its 2030 target – which is likely to take several months,” she writes. Biniaz also urges the US to resubmit a mid-century decarbonisation strategy and restart contributions to the Green Climate Fund.

The Obama Administration had pledged $3bn to the Green Climate Fund, which was established by the UNFCCC to support emissions reduction and climate adaptation projects in developing countries. However, after taking office Trump reneged on the remaining $2bn from the US pledge.

The Biden Administration could do even more, according to Biniaz. President Biden could revive the Major Economies Forum; prioritise climate at the G7 and G20; mobilise US diplomats to push for strong emissions reduction initiatives at the International Civil Aviation Organization and International Maritime Organization; seek US Senate approval of the Kigali Amendment to the Montreal Protocol; and reinstate the State Department’s special envoy on climate change.

“Ideally, Congress would hand the administration a sweeping climate law early in the year, maximising the effectiveness of US diplomacy,” she says.

Early and aggressive executive action on climate and clean energy from the Biden White House would enable the US to fulfil its obligation to lead the global clean energy transition. And if the Democrats win control of the Senate, Biden could accomplish even more. With no time to lose in the fight to prevent runaway climate change, the world has never needed US leadership more.

Topics in this article: Donald Trump, Paris Agreement, US, US Elections