With so much competing for voters’ attention as Election Day looms in the US – including the still-raging pandemic and a contested Supreme Court nomination – it is important to remember that climate change and clean energy are on the ballot. In deciding whether to give President Donald Trump another term or hand the presidency to Joe Biden, US voters are also choosing the trajectory of the country’s clean energy transition.

Over the past four years, President Trump, in his rhetoric and in his appointments to senior positions in the federal government, has acted as if empirical reality – here-and-now climate change, low-cost solar and wind power – doesn’t exist. A Cabinet stocked with former industry lobbyists has favoured companies over people; Donald Trump campaigned as an economic populist, but has governed as a corporatist. The Trump administration has completed or is pursuing rollbacks of nearly 100 environmental rules, according to the definitive tally maintained by the New York Times. 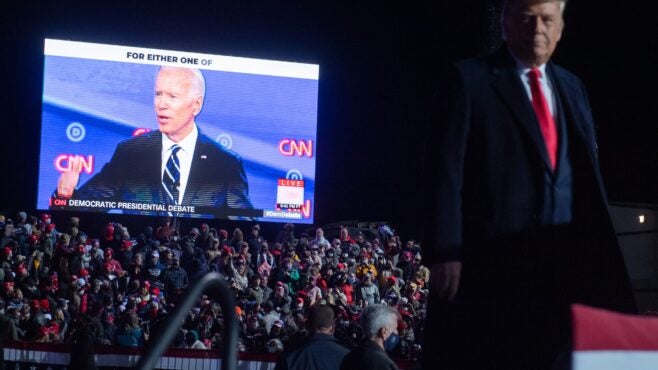 At key moments, the White House was blocked from realising plans that favoured fossil fuel incumbents over low-carbon competitors.

Trump administration budget requests have repeatedly sought to eliminate funding for the Advanced Research Projects Agency-Energy (ARPA-E), an arm of the Department of Energy that funds R&D into moonshot energy technologies. The White House’s budget request for fiscal year 2021 proposed zeroing out ARPA-E’s budget; it would have also slashed $1.2bn from the budget of the Energy Department’s Office of Science.

Will the summer’s extreme weather change climate policy in Europe and the US?

Opinion: Joe Biden faces up to the climate crisis

“If enacted, this budget would impose the largest single-year cut to energy RD&D [research, design and development] investments in the history of the department, bringing federal energy RD&D down to its lowest level since 2007,” the Information Technology & Innovation Foundation said when the budget request was released.

Funding for energy innovation in general, and ARPA-E in particular, enjoys rare bipartisan support in the US Congress, so lawmakers have ignored these Trump administration budget requests. However, if Trump is elected to a second term, and voters send a more pliant Congress to the Capitol, such deep-cutting budget requests could be approved.

And, yet, despite all of Trump’s bluster and anti-regulatory zeal, he has not succeeded in derailing the country’s energy transition. He has failed to deliver on a signature 2016 campaign promise to revive the US coal industry. Instead, more coal-fired power generating capacity has been retired during President Trump’s nearly four years in office than during former President Barack Obama’s second four-year term. Coal-fired power in the US is in terminal decline.

US coal production in 2019 declined to the lowest level since 1978. In the same year, US renewable energy consumption increased for the fourth year in a row and surpassed coal consumption for the first time since 1885. Coal plant closures announced as of June 2020 will drop the capacity of the US coal fleet below 200GW, down from the 314GW peak in 2011. By early October 2020, renewable sources of utility-scale power had generated more electricity than coal on 131 days of the year.

What explains the turnaround? In part, it is pure economics. New utility-scale onshore wind is the cheapest source of power you can add to the grid in the US, says research firm Bloomberg NEF, with projects at the best sites achieving an unsubsidised levelised cost of electricity (LCOE) of $26 per megawatt-hour (MWh). New-build onshore wind ($26–$54/MWh) and solar PV ($29–$38/MWh) power is often cheaper than buying power from existing coal ($34–$48/MWh) and combined-cycle natural gas ($23–$32/MWh) plants, shows the latest LCOE data from financial advisory firm Lazard. In addition, subsidised onshore wind ($9–$43/MWh) and solar PV ($24–$32/MWh) power stations are even more competitive with fossil-fuelled incumbents.

Corporations are also filling the federal leadership void on clean energy. In 2019, US companies installed more than 1,280MW of new commercial solar capacity. The Solar Energy Industry Association’s top ten ranking of installed solar capacity by company is dominated by tech giants like Apple, Amazon, Google and Facebook. US companies are responsible for installing more than 8,300MW of on and off-site solar power projects over the last decade.

If Joe Biden is elected on 3 November, the momentum behind clean energy in the US, despite the Trump administration’s efforts to prop up fossil energy over the past four years, could be unleashed. Biden’s $2 trillion (€1.68 trillion) climate plan is the most ambitious proposal of its kind presented to voters in a general election campaign for the US presidency. And it is pitched to voters as a green economic stimulus package. “Our environment and our economy are completely and totally connected,” the campaign says.

Joe Biden’s climate plan calls for a carbon-free power sector by 2035 – a decade ahead of front runner California – and net-zero emissions economy-wide by 2050. The unprecedented scale of Biden’s 2020 green economic stimulus proposal, coming a decade after the stimulus package he managed as vice-president, is a sign of US voters’ increasing willingness to support clean energy. The stimulus bill passed in 2009, in response to the Great Recession, included $90bn (€76bn) for clean energy.

Voters don’t appear to be turned off by the price tag of Biden’s new plan. In a recent New York Times/Sienna College poll, two-thirds of voters said they supported the $2trn climate plan. Democratic and Republican voters alike overwhelmingly support research into renewable energy sources and regulating CO2 as a pollutant. It is now up to Americans to decide whether the president sworn into office on 20 January 2021 will seek to thwart or fulfil the country’s clean energy potential.

This article is part of an Energy Monitor series on the potential impact of a Biden win on the clean energy transition. For more coverage of the US presidential elections, check out our sister site New Statesman.

What the US election will mean for global climate policy

Topics in this article: California, Donald Trump, US, US Elections