Creating a low-carbon economy will bring huge business opportunities, but getting companies and technologies up and running at the speed and scale to get to net zero by mid-century will require investment. Lots of it. In May 2020, the UK set up the venture capital Clean Growth Fund (CGF) to try to address this issue. Energy Monitor spoke to managing partner Beverley Gower-Jones about the fund’s investments, and the need to accelerate the clean energy transition. 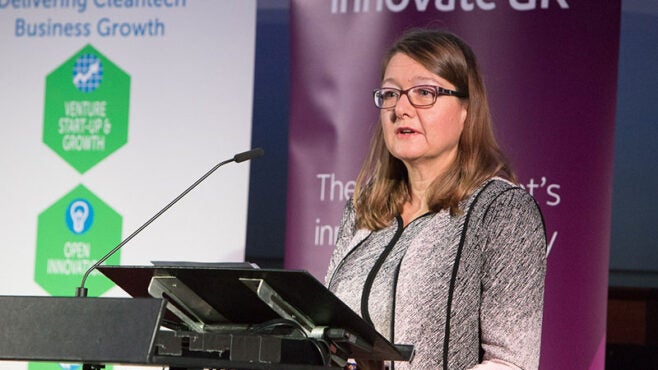 “We are looking to invest in first-of-a-kind technologies that can be rapidly scaled up and rolled out,” says Gower-Jones. “The sectors we are looking at are power, buildings, transport, industry and waste.”

Created with the support of CCLA, a charity fund manager, and the UK Department of Business, Energy and Industrial Strategy, the fund made its first investment – in Piclo, a smart grid technology company – in December 2020. Its aim is to deliver cleantech investors a commercial return and achieve a quantifiable reduction of greenhouse gas emissions, with the target of reaching £100m by November 2021.

For technologies to receive funding from the CGF, companies must fill in a climate assessment report, showing how much carbon can be saved at a certain cost per tonne (t) over a certain time, and that there is potential for mass market adoption, she explains.

How to finance meaningful cleantech projects

“We have an unwritten, internal rule that they have to reduce greenhouse gas emissions by 100,000t a year,” says Gower-Jones. “We want to make sure each venture has a meaningful impact.”

Technologies that will never exceed 1% shouldn’t compete for the limited resources we have for getting to zero. Bill Gates

This figure sounds impressive, but it pales compared with other benchmarks out there. Any technologies funded by Microsoft founder Bill Gates’s Breakthrough Energy organisations for example, must be capable of reducing emissions by “at least 500 million tons a year”, he writes in his book, How to Avoid a Climate Disaster, published this week.

“That is roughly 1% of global emissions,” writes Gates. “Technologies that will never exceed 1% shouldn’t compete for the limited resources we have for getting to zero. There may be other good reasons to pursue them, but significantly reducing emissions won’t be one of them.”

He bases his calculations on the fact that “51 billion tons of greenhouse gases are typically added to the atmosphere every year” and that “zero is what we need to aim for”.

Emissions reductions are far from the only criterion considered by CGF. Projects invested in today need to be capable of standing on their own two feet and running at scale by 2025. “In five years, they need to have grown enough so we can exit the project but it will carry on growing,” says Gower-Jones.

Speeding up the transition to net zero is partly a question of money, she says. She deems the UK government’s recent net-zero target backed by £1.9bn of investment “important”, but insists “more investment” will be needed.

However, she is clear too that cash alone will not produce the necessary results.

Given that products generally take 30 years to get to mass market, getting to net zero also means speeding up the adoption cycle and that depends on all players being ready, including standards and the supply chain, says Gower-Jones. “Everything has to move before something can be adapted,” she says.

One way of speeding up the process of bringing net-zero technologies to market is to create alliances between suppliers and buyers, says Gower-Jones. Technologies alone are not enough; new business models will also be needed.

She gives the example of cleaner jet fuels. Producers are likely to find it difficult to commercialise these new fuels if they are significantly higher in price than the fossil fuels they are expected to replace. However, costs can be better managed if there is a commitment from the outset from airline companies to buy the new fuel.

Likewise, the process of taking waste and turning it into petrochemicals or biomethane will scale up and become affordable much faster if there is an upfront, long-term agreement with the chemicals industry.

The fund is also investing in opportunities linked to more distributed energy sources, such as wind and solar, with a different reliance on and relationship to the grid.

“We are looking at the growing electrification of transport,” says Gower-Jones. She highlights, in particular, the potential of connecting cars to the grid and buildings, including owners as prosumers, selling energy from solar panels to the grid or neighbours, or storing it.

“There is lots of room for innovation, it is very exciting.” Beverley Gower-Jones

One of the fund’s latest investments is in Indra, a UK electric vehicle and smart energy technology company developing charging and energy storage solutions for home and commercial use. The deal is worth £6m, with funding also coming from Gulf Oil International.

“Value chains are changing and where we place value is changing,” says Gower-Jones. “There is lots of room for innovation, it is very exciting.”

She is confident there is no lack of projects ready for investment. “When we opened the fund in May 2020, we had £500m of deal flow of really high-quality projects looking for innovation.”