Joe Biden opened the two-day virtual Leaders Summit on Climate with a headline-grabbing commitment to reduce US greenhouse gas emissions by 50–52% from 2005 levels by 2030. Biden also announced a new plan to boost spending on international climate finance. 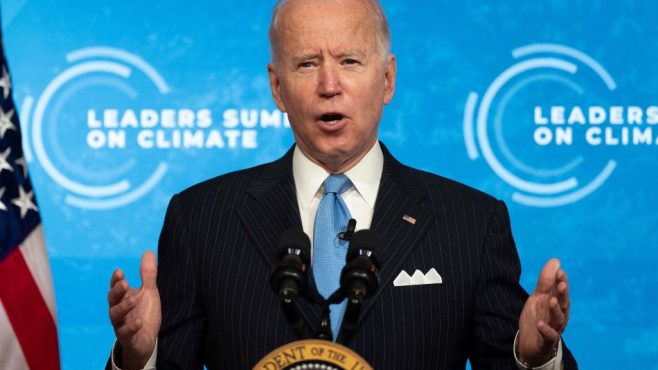 US President Joe Biden speaking from the White House in Washington, DC at the virtual Leaders Summit on Climate on 23 April 2021. (Photo by Jim Watson/AFP via Getty Images)

The White House wants to double annual public climate finance to developing countries by 2024 compared with the average level of spending during the second half of the Obama administration. Spending on adaptation finance would triple by the same year. If approved by Congress, the increased spending on overseas climate finance would reach $5.7bn (€4.73bn) by 2024, with $1.5bn allocated to adaptation.

Climate campaigners want the Biden administration to spend more. The announcement “is a welcome step, but the lack of firm commitments falls short of what is needed”, says Oil Change International’s Collin Rees. ActionAid USA is calling on the US to spend $800bn through 2030 on international climate finance.

Additional commitments in the White House plan include a target for the US International Development Finance Corporation to increase its climate-related investments to comprise at least one-third of new investments by fiscal year 2023. There is also a pledge to create guidance for federal departments and agencies to “seek to end international investments in and support for carbon-intensive fossil fuel-based energy projects”.