An antidote to China’s Belt and Road Initiative (BRI) has been a long time coming. For more than ten years now, Beijing has run amok building fast-food roads, dirty power stations and other forms of environmentally degrading, debt-burdening infrastructure in developing countries across Eurasia and Africa. Welcome to the world of the BRI. 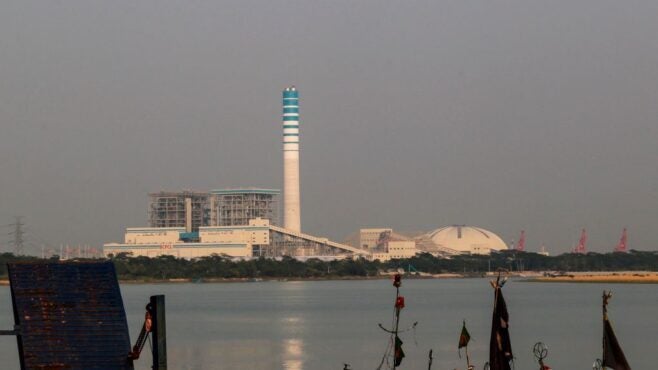 The Payra Power Plant in Sri Lanka is one of many built by China as part of the Belt and Road Initiative (BRI). Will COP26 see the West come up with a greener alternative to the BRI? (Photo by AFP via Getty Images)

Granted, it has not been all bad, with China also erecting swathes of renewable energy facilities, for example – but for every green step forward, it has taken two black strides back. In short, China is the behemoth of global infrastructure finance, but its overseas investments remain concentrated on fossil fuels and other ‘dirty’ projects.

In recent years, the BRI has financed some 240 coal-powered plants across Asia and Africa, despite Beijing’s noises about scaling down. Remember, coal plants have a lifespan of about 40 years, so it is no surprise some calculations suggest that by 2050 half of all carbon emissions could come from BRI countries.

Chinese investment in lower-middle-income and low-income countries is key for these countries’ energy consumption and (generally) huge infrastructure deficit. For the past decade, these locations have relied on affordable Chinese loans to meet their needs.

The problem is that, as shown by recent research, Chinese loans often involve opaque contracts that leave low-income countries in a debt trap, beholden to Beijing – a trend that threatens to undermine global debt relief efforts. An even more recent report shows that the BRI has left scores of lower and middle-income nations with “hidden debts” totalling $385bn (with more than 40 countries having debt exposure to Beijing greater than 10% of their GDP.)

Will COP26 bring a green alternative to the BRI?

So what has ‘the West’ been doing while China steamrolled through all of this fossil fuel energy generation? Very little, other than bemoaning the BRI’s influence.

Change, however, is afoot thanks to fresh leadership in the US, the UK and the EU. The past nine months have seen a rapid, heady spate of announcements, starting in March 2021 when US President Joe Biden said he and UK Prime Minister Boris Johnson were hatching a plan to set up an infrastructure effort that rivalled the BRI.

A month later, the EU and India announced they were in talks to build joint infrastructure projects around the world – more specifically, a ‘connectivity partnership’ in sectors including energy, digital and transport that would offer better legal safeguards and less onerous debt terms than those offered by China.

Then came June’s G7 Summit, where leaders said they were embarking on a global infrastructure initiative, described by the Biden administration as “values-driven, high-standard and transparent”.

Things crescendoed a few weeks ago when, during the EU’s State of the Union speech, European Commission President Ursula von der Leyen waxed lyrical about the Global Gateway, the EU’s official plan to increase international spending on infrastructure and other projects aimed at rivalling the BRI’s economic and political influence. While previous announcements shied away from pitting anything against China, Von der Leyen was unabashed this time round.

So what has ‘the West’ been doing while China steamrolled through all of this fossil fuel energy generation across the world? Very little.

In light of the global economy’s “hyper-competitiveness”, she said in her speech, the EU needed to become a “more active global player” by creating links around the world, not “dependencies” – a reference to concerns in Western countries about the BRI’s debt burden on developing nations.

Von der Leyen has shattered the veneer, emboldening others. For example, Germany’s ambassador to the EU, Michael Clauss, said the initiative was “important to shape globalisation the European way”.

How the West will win

We have seen the BRI antidote go from strength to strength over the past nine months. Now we need to see it go the extra mile at November’s COP26.

The fight against climate change can only be won if the developing world too, goes green – which, simply put, requires funding from the world’s wealthier countries. This is why, in 2009, the developed world agreed it would provide $100bn a year by 2020 to help poorer countries combat climate change.

Surprise, surprise, these figures have not been met, something that COP26 is already drawing much-needed attention to. In late September, Biden promised to double the amount of money the US is providing towards this cause. More pledges are expected in the run up to, or during, COP26.

For many countries, this funding deficit is the biggest issue to resolve in Glasgow. The message from the world’s poorer countries is loud and clear: if the West wants ambitious climate targets, it is going to have to help pay for them.

Never, therefore, has the importance and urgency of an alternative to the BRI been so evident. A failure to take this initiative forward at COP26 would be disastrous, not least since the planet is on the road to self-immolation. Glasgow offers no better forum for agreements to be made and specifics hammered out.

It remains unclear if the UK, US and others will formally join the EU’s Global Gateway – and even if they do, where will funds (intended to come from the public and private sectors) be sourced from?

The elephant in the room is that this year’s conference remains blighted by Covid-19’s impact on world travel. In mid-September, more than 1,500 climate-related non-profits called for COP26 to be delayed, arguing it would be too difficult for developing countries to be fairly represented due to travel restrictions. Even China’s attendance has been in doubt of late.

While the conference is set to go ahead, these challenges emphasise just how much developed countries need to use their economic (and logistical) advantage to mobilise an actual alternative to the BRI. It will make or break the success of COP26.