Corporate renewable electricity sourcing in Europe has increased significantly in recent years. Businesses have signed over 15 gigawatts (GW) of renewable power purchase agreements (PPAs) and 2021 is set to be another record year. At the same time, the EU has increased its climate ambitions, pledging to reduce carbon emissions by 55% compared with 1990 levels by 2030, and to reach climate neutrality by 2050.

These ambitions are laudable, but delivering on corporate and EU climate commitments will require massive renewable energy deployment and electricity grid investments to become a reality. 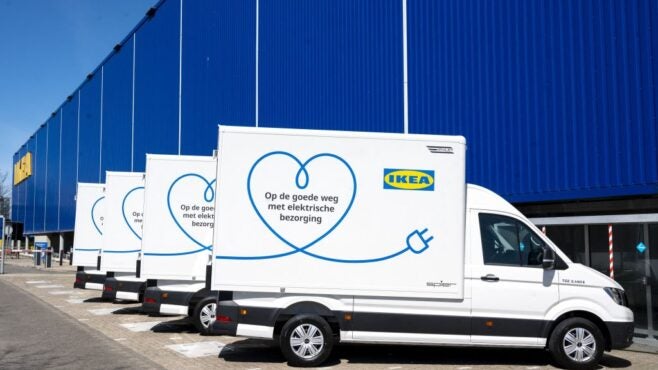 Electric delivery trucks outside an Ikea store in Amsterdam, the Netherlands, in April 2021. This is the second city after Shanghai where the company will deliver all packages with electric vehicles. (Photo by Evert Elzinga/ANP/AFP via Getty Images)

At the moment, implementation is lagging. Not enough renewables installations are being brought online to meet EU decarbonisation targets. To deliver a 55% emissions reduction, the amount of new wind being built each year would need to double from the 15GW expected in 2021 to 30GW. Solar installations would also need to increase to 58GW a year across Europe to reach 660GW by 2030.

More recently, a group of industrial CEOs signed a letter calling for a massive increase in renewables deployment to enable them to switch to clean energy. In 2019, the sector was responsible for 775 million tons of CO2-equivalent. It is vital to “abolish grid bottlenecks, encourage the free flow of energy across borders, and remove barriers to integrating renewable energy into the power used by industry,” said the letter.

In July, the European Commission released its ‘Fit for 55’ package, laying out how it intends to meet the 55% emissions reduction target, including critical changes to the EU Renewable Energy Directive.

The proposal for the new directive raises the EU renewables target from 32% to 40% by 2030. To help meet this increased ambition, the Commission identifies a central role for corporate purchasing. It emphasises the need for member states to remove barriers to corporate renewable PPAs and strengthens the legal framework to facilitate their uptake.

One key change involves Guarantees of Origin (GOs), certificates that validate electricity production and consumption as renewable. These are issued to renewable energy producers and purchased by consumers, to provide traceability. A well-functioning, harmonised GO system is critical to corporate renewable energy sourcing in Europe.

However, some European countries still do not issue GOs to energy producers that also receive financial support from the state (France, Germany and Ireland) or are behind-the-meter; that is, on-site production (Italy, Poland and Spain). This lack of certification creates challenges for corporates that need to verify their renewable energy claims, and breaks the link between producers and consumers.

Now, the Commission is proposing that all renewable energy producers receive GOs. It also wants to remove the option for member states to retain GOs from producers that receive financial support from the state, something RE-Source has long advocated.

The 'Fit for 55' package also recognises permitting as a major bottleneck to bringing more renewables online and empowers the Commission to tackle this. Many member states have lengthy, complex permitting procedures. Speeding these up, while maintaining appropriate environmental protections, will be key to deploying the necessary volumes of renewables.

The EU has set impressive climate targets for 2030 and 2050, and the Commission has laid out the path it intends to take to get there. However, these proposals will need the approval of member states and MEPs to become binding. RE-Source will continue to push for a GO framework that provides more granular information to clean energy buyers, and for frameworks that enable the self-consumption of renewable energy. Improvements like these will further open up markets to corporate renewable electricity sourcing across the EU.

To empower renewable electricity buyers and guide them through the procurement process, RE-Source has created the Renewable Energy Buyers Toolkit, which includes reports, information and template PPA contracts.

Topics in this article: Comment, EU, Fit for 55, PPA