Investments in renewable energy in Africa are gaining momentum with the installation of multi-billion-dollar clean energy infrastructure meant to enable the country’s transition from fossil fuels to low-carbon energy sources. However, while projects are getting traction, so is increasing opposition from indigenous communities whose land is often used to implement them. 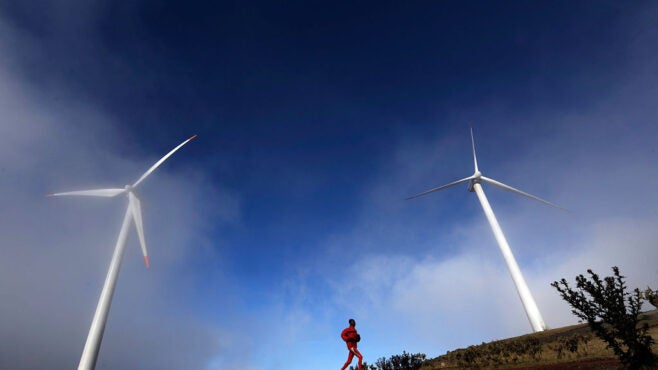 A man runs past wind turbines in the Ngong hills, 25km south-west of Kenya’s capital, Nairobi. (Photo by Tony Karumba/AFP via Getty Images)

Like many other countries in Africa, Kenya faces an enormous energy challenge. Its growing population and economic development have seen energy demand soar, prompting the government to turn to renewable energy sources to help fulfil it.

For Kenya, the push to promote clean energy has taken the form of heavy investments in geothermal, solar and wind power, mostly in areas that are less populated and inhabited by indigenous communities.

Over the years, Kenya has made remarkable progress in installing renewable energy. The country’s Vision 2030 initiative, which aims to turn Kenya into an industrialised, middle-income economy by 2030, targeted 100% renewable energy by 2020. Kenya has installed electricity capacity of 2.7GW, of which 93% is generated by renewables such as geothermal, hydropower, wind and solar, says the ministry of energy and petroleum.

Kenya has been able to mobilise private investment into its power sector thanks to a raft of progressive reforms.

In 2018, the government launched the Kenya National Electrification strategy, which promotes private involvement in off-grid solutions including mini-grids and stand-alone solar systems. A year later, the country enacted the Energy Act, 2019, which provides feed-in tariffs to encourage power generation from renewable sources.

Land conflicts between local communities and investors are at the heart of this failure.

In Kenya, the transition to renewable energy has been synonymous with the displacement of local communities. For investors, it has meant protracted court battles, stalled projects and loss of revenue.

Last year, a wind farm project in the coastal town of Lamu was nullified by the county government for failing to adhere to resettlement agreements set out by lawmakers.

The $210m Baharini wind power project, led by a consortium of Belgium’s Elicio NV and Kenwind Limited Kenya, had secured some 3,206 acres of land with plans to install 38 wind turbines expected to generate 90MW of power. The consortium had signed a 20-year power purchase agreement with Kenya Power and Lighting Company.

It is important that in planning projects, legitimate local land rights are respected and that very structured and participatory engagements with land rights stakeholders are held. Linus Mofor, UN Economic Commission for Africa

The project’s nullification by the county government resulted in confusion, chaos and displacements among the surrounding communities and landowners.

“I urge the house to compel the Lamu County Government through the land and physical planning department to demarcate, survey and issue title deeds to the people affected in the said land that was meant for the project,” said Antony Njomo, a member of Lamu’s county assembly, when he introduced a motion to nullify the project.

The Baharini project is the second wind farm to succumb to fierce opposition from local communities. The Kinangop Wind Park, which was to generate 60MW, was cancelled in 2016 over hostilities from residents concerned about a lack of proper community engagement, compensation, relocation and the manner in which the land was leased.

Following its cancellation, Kinangop Wind Park Limited filed a legal suit against the Kenyan government at the International Court of Arbitration in London demanding to be compensated $310m. In 2018, the court dismissed the case.

Other large renewable energy projects have been more successful at navigating opposition from local communities. They include the 745MW of geothermal capacity installed in Kenya’s Rift Valley and the 310MW Lake Turkana wind power plant, the largest in Africa.

In both cases, local communities petitioned investors to honour resettlement agreements. This delayed but did not derail the projects.

These on-the-ground conflicts are a result of poor policies and regulations that fail to engage local communities, say clean energy experts. They urge governments across Africa to respect legitimate local land rights to enable it to increase its installed renewable capacity from 250GW to at least 500GW by 2030.

“It is important that in planning projects, legitimate local land rights are respected and that very structured and participatory engagements with land rights stakeholders are held to ensure shared benefits between communities, project developers and government,” says Linus Mofor, energy, infrastructure and climate change expert at the UN Economic Commission for Africa.

Given that renewables projects such as hydro, solar and wind require substantial amounts of land, Mofor warns that failure to respect local land rights could lead to long and costly delays.

A solar PV farm of 1MW can require up to five acres of land. Generating the same amount of energy from a wind farm may require as much as 80 acres, although 90% of the land in this case can also retain its original use.

“It is important to fully sensitise communities and other land rights stakeholders on planned projects to help eliminate the possibility of misinformation and efforts by certain parties with ulterior motives to use innocent communities to disrupt certain projects,” said Mofor.

Industry players worry the current trend could reverse the gains made so far, if proper policies are not put in place.

“Kenya needs to formulate policies that protect the land rights of indigenous communities and create a conducive environment for investors to promote its renewable energy ambitions,” says James Mailu, a technical committee member with Sustainable Energy for All, a global platform that promotes universal access to clean energy.

In some instances, human rights defenders are raising serious questions about how “clean” and “green” renewables projects are.

“The major conflict between investors and these communities is benefit sharing and resettlement agreements,” says Daniel Kobei, executive director of Ogiek, an indigenous people and part of the Right Energy Partnership, an indigenous-led alliance working on rights-based approaches to energy development. “Most of the clean energy generated from these projects hardly reaches local communities,” he emphasises. “Instead it is sold directly to the national grid.”

Kobei adds: “We are holding sensitisation workshops in various parts of the country where these projects are based to educate these communities on their rights and engage the government to formulate policies that protect land rights.”

While renewable energy is not the only issue in conflicts between local communities and investors, 63% of the disputes related to private sector land and natural resource investments in Africa are caused by the forceful eviction of people from their land. Infrastructure and public utilities are driving most of the disputes in East Africa, according to research by TMP Systems, a UK-based consultancy, and the Rights and Resources Initiative, an NGO.

The research also reveals that communities are making use of stronger legal frameworks to bring lawsuits against companies that violate their rights. 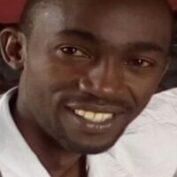