Pharma, like every other industry, has an impact on the environment – and in the face of a climate crisis, it has a responsibility to find ways to mitigate this harm. In a survey conducted last year by GlobalData, Energy Monitor‘s parent company, 43% of respondents considered the environment the most pressing ESG (environmental, social and governance) issue for the pharmaceutical sector to address.

As members of an industry that emits more greenhouse gases than the automotive sector, drug companies must make a concerted effort to reduce the carbon footprint associated with getting their medicines to patients – but how?

Every stage of the pharmaceutical supply chain has a carbon footprint – right down to the very beginning, where the raw materials for active pharmaceutical ingredients (APIs) are sourced.

Jing-Ke Weng is co-founder of Double Rainbow Biosciences, a sustainable biotech dedicated to developing new therapeutics with minimal impact on the environment. He says the manufacture of APIs for small-molecule drugs relies largely on chemicals derived from petroleum, a fossil fuel. 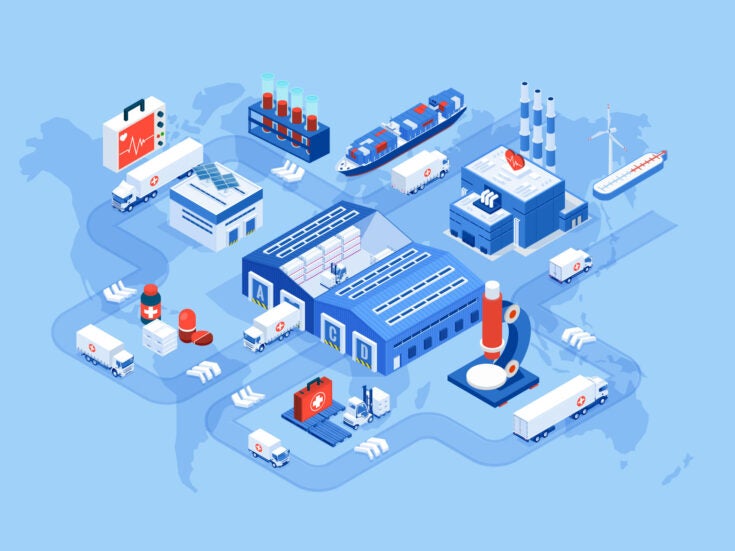 There are many energy-intensive steps in the chemical synthesis of raw materials and solvents, Weng explains. And the amount of carbon it takes to make these molecules is usually not calculated, he says.

Double Rainbow’s long-term vision is to replace fossil fuel-reliant manufacturing with methods based on synthetic biology and inspired by the chemical processes seen in nature.

Weng’s group is trying to assemble microbial enzymes from diverse sources in a particular manner to make a molecule that can be incorporated into a new or existing drug. “Conventionally, these compounds have to come from natural resources, but now we have new technology to entirely replace that with a fermentation-based method, which is a major step.”

Manufacturing the finished pharmaceutical product is another carbon-intensive stage of a pharma company’s supply chain. One of the most effective ways of reducing carbon emissions associated with drug production is to adopt continuous manufacturing, an efficient alternative to batch manufacturing, that combines multiple separate production stages into one single, continuous production line.

In 2014, US biotech Amgen opened a $200m biomanufacturing plant incorporating continuous purification methods in Singapore. Compared with a traditional manufacturing facility, Amgen’s plant produces 69% less carbon emissions – a promising figure for a company that plans to be carbon neutral in its operations by 2027.

French healthcare company Sanofi followed suit in 2019, opening a continuous manufacturing plant in Massachusetts, US, that it said will generate 80% less carbon emissions than the company’s first-generation facility.

“Continuous process manufacturing has been evolving rapidly over the last six to 10 years,” says Scott Lawson, a partner at professional services network PwC. “The focus has been on small-molecule manufacturing principles and big pharma has made investments in this space.” However, now that is being translated into what Lawson calls mid-tier pharma companies as well.

Weng says Double Rainbow has successfully implemented their sustainable, fermentation-based manufacturing technology on both a small and tonne-level scale.

Still, he says it’s going to take a lot of effort to expand to more complicated compounds or other drug molecules that are currently on the market. “There are existing infrastructures [to adopt sustainable fermentation widely], but the whole industry will need to do a lot of rethinking and reallocation of its resources, so we are better prepared for that transition.”

If pharma and biotech companies are to meaningfully curb their carbon emissions over the next few years, moving away from fossil fuels and shifting to greener, renewable energy resources is a necessary step.

In 2021, energy and automation giant Schneider Electric – ranked the world’s most sustainable corporation that same year – launched the Energize programme to increase the pharmaceutical industry’s access to renewable energy. Through Energize, drugmakers will be given the opportunity to access and contract for renewable energy throughout their value chain. Ten global pharma companies signed up to promote the initiative and encourage their suppliers to decarbonise with renewables: AstraZeneca, Biogen, GSK, Johnson & Johnson (J&J), MSD, Novartis, Pfizer, Novo Nordisk, Sanofi and Takeda.

When it comes to greener energy, at least, the pharma industry at large appears committed to making changes. In addition to collaborating on the Energize programme, many large drug companies have set ambitious carbon reduction targets for themselves.

Pfizer has pledged to go carbon neutral by 2030 and will, among other strategies, reduce direct emissions by 46% and purchase 100% of its electricity from renewable sources. Following a virtual power purchase agreement with Vesper Energy, Pfizer expects its North American operations to be 100% solar-powered by the end of 2023.

Over in Europe, Novartis is working to achieve carbon neutrality across its operations by 2025 and throughout its supply chain by 2030. The Swiss company’s chief sustainability officer, Montse Montaner, told Pharmaceutical Technology: “Novartis is on track to deliver its 2025 carbon neutrality target for our own operations, with a 34% reduction in Co2 emissions achieved to-date, compared to our 2016 baseline”.

“We have developed a detailed framework and robust plan to underpin effective collaboration with suppliers towards delivery of our 2030 carbon neutrality targets,” she adds.

Multinational Catalent, however, has beaten many of its fellow pharma players to the punch; in 2021, the company announced that an impressive 97% of its electricity usage had been obtained from renewable sources such as wind, solar, hydroelectric and biomass.

While drug manufacturing carries a large carbon footprint, the steps taken to distribute medicines out of the factory and into patients’ hands also have a significant impact on the environment.

One way by which distribution in pharma contributes to climate change is the use of cold chain shipping, which allows temperature-sensitive products, like insulin or some vaccines, to be transported at controlled temperatures that do not compromise their efficacy or safety. Usually, these temperatures must be maintained all the way from point of manufacture to the patient.

Refrigerated vehicles require additional energy to power the cooling systems, known as transport refrigeration units (TRU), that keep products at a controlled temperature. According to low-emission transport and energy research technology organisation Cenex, the average diesel trailer TRU produces around 8 tonnes of tailpipe CO2 a year – equal to the output of four average UK cars in a year.

An obvious way to reduce the carbon emissions caused by cold chain shipping is by investing in greener fuels and energy sources for transport vehicles. Hydrotreated vegetable oil, a renewable, bio-based fuel that can be used in diesel engines, can reduce greenhouse gas emissions by up to 90% compared with regular diesel. Other alternative fuels include compressed natural gas, liquefied natural gas, liquefied petroleum gas (LPG), and their renewable counterparts – biomethane and bio-LPG. Research published in 2019 found that gas-fuelled vehicles saved over 1,400 tonnes of Co2 emissions compared to diesel across a two-year period.

Lawson adds that companies should look to invest in localised manufacturing – producing the medicines nearer to where they’ll be used – as a means of reducing the carbon footprint associated with pharmaceutical distribution.

“Can we re-shore certain pieces of the manufacturing process, to optimise the amount of time a product has to be maintained within a storage environment or shipped amongst the different transportation solutions?” he asks. “Anything that reduces the complexity of the supply chain, and the number of movements that need to occur, is seen as a good thing.”

It’s not just fuel consumption that makes cold chain shipping environmentally unsound. Peter Gisel-Ekdahl is CEO of Envirotainer, a provider of secure cold chain solutions for the air transport of pharmaceuticals. He says the environmental impact of cold transport can be reduced by adopting alternatives to ‘passive packaging’ that consist of less-than-eco-friendly single-use plastics, dry ice and cardboard, to keep medicines at a stable temperature.

“An ‘active’ solution is different; it’s more like a reusable, battery-powered unit,” Gisel-Ekdahl says. “These are used in a circular economy where sharing, leasing, reusing, repairing, refurbishing and recycling is central to their design.”

“Over the lifetime of their use, these thermally controlled containers are environmentally superior, he explains. “In fact, greenhouse gas emissions associated with active solutions are more than 90% lower than passive, even considering an extra leg of return transport.”

Whether passive or active systems are employed, reducing the amount of packaging materials used can make a big difference. By finding more efficient ways to store products in transport vehicles, pharma giant J&J cut the amount of packaging used to transport its medicines by 60%. Taking up less shipping space means fewer vehicles are needed to transport the products – which translates into less carbon emissions at the distribution stage of the supply chain.

A greener future for pharma?

The solutions for an eco-friendlier supply chain are gaining traction in the pharma industry – but is there a desire to change?

Weng is hopeful the industry will move in that direction in the next decade. “But the strongest force will come from the market itself – just the inability to do business as usual will be the main driving force for companies to think, at a fundamental level, how they could replace non-sustainable steps with more sustainable biology-based approaches.”

Lawson believes “there’s an appetite” in executives across the pharmaceutical sector to achieve net-zero goals, but eco-friendly technology and greener methods must be applied throughout a drug company’s value chain to meaningfully reduce the industry’s impact.

“If the industry is to serve its mandate correctly, it needs to think holistically, right across the value chain,” he explains. “If we want to be net zero, all aspects of the value chain need to be achieving the net zero purpose, not just outsourcing the bits that are too difficult or complex.”

Still, Lawson is optimistic the pharmaceutical industry will eventually make the shift to greener operations and achieve a smaller carbon footprint. There has been a growth in the desire to do so, he says.

“Given the highly science-driven nature of our sector, I do believe it will take significant steps towards that.”

Editor’s note: This article was originally published on our sister site Pharmaceutical Technology.

Topics in this article: ESG, Sustainability

Darcy Jimenez is a healthcare reporter for Pharmaceutical Technology, and is particularly interested in stories about AI, antibiotic resistance, and global health equality.
SUBSCRIBED